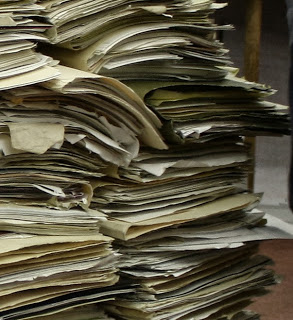 People who have visited me in my studio are probably surprised to see that as part of my creative process I start with what can only be described as piles of papers, but that is because deep down I am a collector. I collect a lot of labels and catalogue pages.

For years, I have been filling boxes and folders with saved scraps of paper that interest me. It is these papers that eventually end up as the starting point for a new pot or collection of pots.

Normally, in my ordered folders things stay among their own kind.  Bicycles are with road markings and toy guns are, at a push, with water pistols and ray guns, but separated.  Storing pictures and information for my artwork is very important and this super organised system works, but only as a depository. When I actually need to do something with them, I need a bit of chaos.

The images and scraps that I have gathered together are like the ingredients for a recipe that need to mix and start talking to each other.  I think it is when the interest in the collected subject (s) becomes overpoweringly compulsive that I begin to move pieces from that pile to join another. This then begins a new, potentially explosive, mixed pile that I might work with. However if a mix doesn’t work out then everything gets separated back into their own folders for another time.

This is exactly how it happened with the latest collection with the Zoom lollies and the peace symbols, latterly joined by the ray guns. This mixed box is still active and is on my work bench now. All the original colour copies are substituted by line drawings so that they can be replicated and re sized and so that I don’t spoil them.

See below the current mix, new additions are the eyes (best copies), used once before in the vase of 55 eyes 2009. 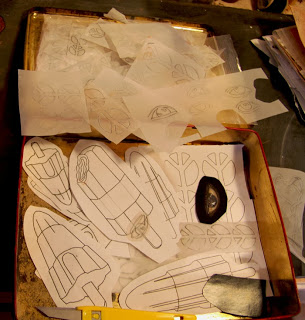 It is a peculiar way of working that has evolved from my early days of childhood scrap book making. This was an activity that I loved; Gloy glue that you oozed out of funny red rubber top with a slit (I once tried it on my lips because it looked like lipstick).

It all comes full circle to my being a collector of information and material. Early childhood conditioning showed me that to own the paper copy of the coveted item was as good as the real thing and actually probably better.

So, it is interesting how this early “hard wiring” of the personality is still core to the way I interpret and manage all the “stuff” that is out there.  Once things are in my scrapbook, box or folder they are mine and I lay claim to them. Many of the objects I am attracted to now have been with me all my life as memory, by collecting the paper versions I am sorting them out. They are quite literally the fabric of who I am.

Ironically, in the end, the true collection is what remains in my mind. The pieces of paper remain, but they become so disorganised once worked with it can take years for the process to throw them up again.

According to Susan Stewart in her book “On Longing”, a collection seeks a form of self-enclosure where history is replaced by some form of classification. She says; “The collection is a form of art as play, a form involving the re-framing of objects within a world of attention and manipulation of context.  Like other forms of art, its function is the creation of a new context, a context standing in a metaphorical relation to the world of everyday life.”

For me the collection is a continuation, an intrinsic part of life and creation.